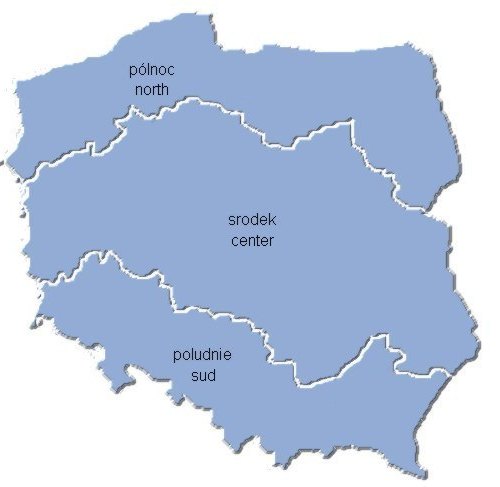 Poland s territory extends across five geographical regions. In the northwest is the Baltic seacoast, which extends from the Bay of Pomerania to the Gulf of Gdansk. This coast is marked by several spits, coastal lakes, and dunes. The largely straight coastline is indented by the Szczecin Lagoon, the Bay of Puck, and the Vistula Lagoon. The centre and parts of the north lie within the Northern European Lowlands. Rising gently above these lowlands is a geographical region comprised of four hilly districts of moraines and moraine-dammed lakes formed during and after the Pleistocene ice age. These lake districts are the Pomeranian Lake District, the Greater Polish Lake District, the Kashubian Lake District, and the Masurian Lake District. The Masurian Lake District is the largest of the four and covers much of northeastern Poland. The lake districts form part of the Baltic Ridge, a series of moraine belts along the southern shore of the Baltic Sea. South of the Northern European Lowlands lie the regions of Silesia and Masovia, which are marked by broad ice-age river valleys. Farther south lies the Polish mountain region, including the Sudetes, the Cracow-Czestochowa Upland, the Swietokrzyskie Mountains, and the Carpathian Mountains, including the Beskids. The highest part of the Carpathians is the Tatra Mountains, along Poland s southern border. The major historical regions of Poland include Pomerania, Greater Poland, Silesia, Lesser Poland, Masovia, Warmia, Masuria, and Podlachia.